The Big and the Small of it All

The 18th century was one of massive changes worldwide, where borders were moved, countries established, and discoveries in sciences abounded. In that period, social boundaries, particularly in England, also became strongly established, dividing rich from poor and poorer.

During such upheaval, Rev. Jonathan Swift wrote and published Gulliver's Travels, which satires existing societies, laws, royalty, parliaments, churches, and just about anything else in England.  Gulliver's Travels stirred up great outcry when it was published in England in 1726, of course, by guilty members of the governing body.

Gulliver's Travels is long, with several sections, and requires a strong attention span to retain Swift's views. His view of society effectively slashes and burns, being a master of satire, to the point where he had to write under pseudonyms.

Rev. Swift excelled at writing cleverly painted parallels, pairing Lilliput with England, each mirroring the other. His skill is comparable to that of putting a pin through two termites on an entomology display board and examining them with a magnifying glass.

Part one is the only one with which I was familiar.  Gulliver is a normal sized Englishman, but appears to be a giant, having been washed up on the island of Lilliput, where Lilliputians are six inches high. This arrival disrupts the nation in so many ways. 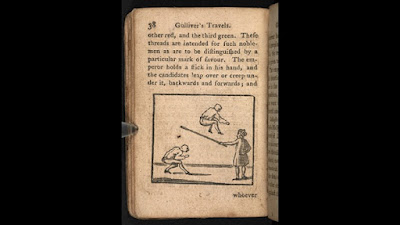 18th century print
Gulliver is amused the Emperor and his court, amazed and amused. How members of the court chosen was a source of delight for Gulliver.

One way is to watch "rope dancers" compete by jumping on silk threads. The one who jumps the highest wins, which granting him a high position of solving problems for the Emperor.

Another is in appointing a treasurer by requiring  competitors to juggle items. Winner is one who can keep the most items juggling in the air, without any falling.

YouTube with Ted Danson
Rules and laws of Lilliput are long, its disputes longer.  But perhaps most interesting of all is a war between Lilliput and Blefuscu, which readers accurately interpreted as the King of England and King of France. One is the "big-endians" and the other "small-endians".

This dispute is very serious and long lived. Thousands of people of both islands had been killed in these wars. This senseless slaughter over eggs is also a veiled comparison to Catholics to Protestants.

This book examines society down to its minutia and is written by a brilliant man. How was it received? By the Governing body or by the common man? Oh boy howdy, it created an uproar in both for different reasons, but no retributions could be made.
Sometimes I wonder what was happening in 2014 when I first wrote this. History is presented in many ways. Rev. Swift was a keen observer of the 18th century (American Revolution time, US government system, freedom of speech...)  He had to use a pseudonym much of the time.
I wonder how this would go now? 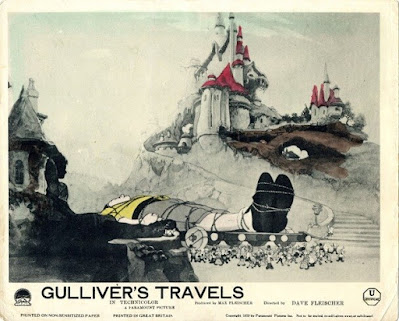