The storage bin had been a part of the farm house as long as anyone could remember.  Even back many generations, that bin was there, leaning up against the barn.

It used to store chicken feed.  Farmer Gunter got rid of the chickens after a few decades.

Then the bin was used to keep coal before the farmer switched to propane.  He cleaned the bin out and thought about how it could be used.  He even asked his wife Bernadette what they should do with the empty bin.

Bernie launched into another harangue about him being too lazy to even think for himself, and then moved on to his other deficiencies.  The list was long.  Gunter stared at her blankly as she continued.

After some time, Gunter packed up his suitcase and gathered up all their money stored in the cellar since the Great Depression.  As he passed by the bin, he patted the lid which sported shiny new nails all around the perimeter.

“You’re right, Bernie.  I shoulda thought of this long ago.”  Silence was his answer.


The was a photo prompt from July 2012. Delores at Mumblings provided the photo and participants were invited to latch a story onto the photo.  This was my take.

Email ThisBlogThis!Share to TwitterShare to FacebookShare to Pinterest
Labels: conflict resolution, decades passed, Farmer Gunter, money in the cellar, old bin on a farm, PhotoPrompt, what is in the bin, wife Bernadette

My Heroes Have Always Been Cowboys.

The 1950s was an amazing time for many reasons.  Too many reasons that can be numbered.  There is one that may have changed the face of modern culture:

My memories of television programming of that time were COWBOY SHOWS!

Oh boy howdy. I loved them. I still do. High Noon, Stagecoach, The Magnificent Seven, The Searchers---So good.

But it was the TV shows that were the candy for children. How many can say they know of or have seen Hopalong Cassidy, Roy Rogers, Gene Autry, The Rifleman,  Have Gun--Will Travel, Rawhide, Wagon Train, and others?

Why did they impact so many generations?  Heroes, we wanted heroes.  Not just heroes, but these were from a glamorized era called the Wild West.

Heroes rode horses (hi-ho Silver,  Let's get 'em Trigger), cooked over a wood fire, slept on the ground, called women "Ma'm" and treated them protectively and with respect, and mostly didn't drink. Heroes had high standards of behavior, which the bad guys didn't. Heroes shot shiny guns, only because they had to. Heroes sometimes had gunfights, which they always won.

Gunsmoke ran for twenty seasons! The opening of the show:

I watched this every week.  Now that it is on cable, Gunsmoke is available for another generation of young cowboys to hitch up their horse and ride off into the sunset. 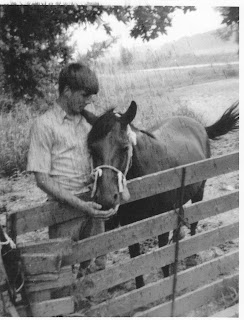 My brother Bill Peck with his horse Sonny.

Struggles with the Past 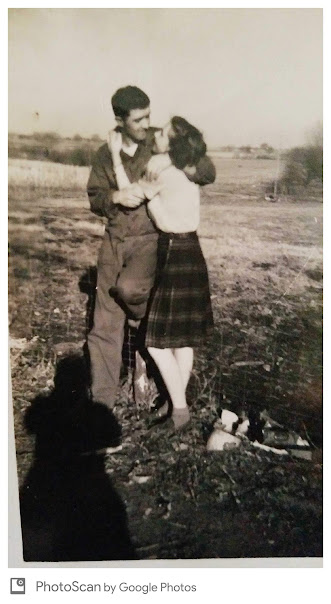 easy delight. Experiencing those stories as if Dad himself were there beside me fills me with a warm satisfaction; those stories will not disappear when I do.

My last post on Susan Kane, Writer is a true to the images what Dad told me more than once. He always said that a good tale can be told over and over. This last post was one tale Dad told me which had me laughing each time, Gift, Freely Given.

My mother never told these detailed stories, ever. Instead, she talked with us as we worked with her. We would be washing dishes and she would have us laughing at some event from her youth.  A small event, like going to dances at her high school when she was sixteen, would have my sister and me in stitches.

Mom was vivacious. Mom loved people and they remembered her for her kindness and enthusiasm. Mom was born in 1928, part of the Greatest Generation. Mom grew up on a farm. Mom was a cheerleader and played the flute in HS. Mom did...


But there was no connection from one situation to one part to the next, just free-flowing.


How do I weave those brief memories into a picture of who my mother was and how did those parts make her who she was?

As writers, what do you do with characters about whom you have to build around, to construct with pieces of understanding?  How honest do you have to be when this is a telling of someone like my mom? And keep the story true and solid?

How do I keep my voice accurate in trying portraying their voice?  Her voice.  Do I try to create a new persona for Mom?

Also, what do I do to be true to the character when their persona has flaws? In my Aunt Helen, her voice includes profanity.  In real life, Aunt Helen did not do this.  However, she held onto the anger of her growing-up years for her entire life. Her photos show that. So, I endowed her with inward profane dialogue.

If I had that anger, what would I do to release it? What would you do with this way to express the character's anger?

So there you have it. And here I ask you: What do I do? What can I do? What would you do?

If this post leaves you confused, please check the post site in yellow above.
Posted by Susan Kane at 2:59 PM 32 comments:

Email ThisBlogThis!Share to TwitterShare to FacebookShare to Pinterest
Labels: acurracy, developing characters, honesty, memories of Dad, memories of Mom, speculation, story telling, what to do next

As preciously discussed in Who comes up with this stuff, my husband will watch any movie that has a bad plot, weak writing, unknown actors, poor filming, and some sort of monster.  In one of a previous posts, it was mutant alligators. That word could be substituted with MUTANT anacondas, dinosaurs, spiders, worms (Tremors..the first one was good; others not so much), ants, or any other species that could be creepy.

Yesterday, another bad movie has appeared: The Attack of the Killer Donuts.

This has everything a bad movie should have, including a scantily clad  girl # scampering to get away from the donuts.  It has experienced actor C. Thomas Howell as the "name" that is supposed to give the movie some credit.

In the past history of "Attack of the....." movies, here are some titles:

Attack of the Killer Tomatoes,

Attack of the Clones (Star Wars),

Attack of the Dead Men (which is a serious accounting of WW1 German poisonous gases),

Attack of the Titans (anime--Japanese animation that actually is not bad).

There are others that I cannot find, but this title is too good to waste. It could be argued that "Godzilla Attacks" could qualify.

These movies appeal to my husband and surely other men who like to ridicule them but continue to watch them.

As my husband watches these works of art and I write, head phones are a marvelous invention.

*Okay, they are bad for us, but once now and then? I leave that up to you.