Books will all surround us.  Books from boxes topple from bookcases.  Boxes? In the garage?This all seems unending, moving and unpacking.  Then, how about finding space in which to place our treasures? This is all unending, a chore that we did not see at the beginning of escrow.
This brings up the subject of “unending”.  Thinking over the years, ghosts of “unending” appear to nag and torment. In the theme of “unending” lies a list, an “unending” list about those ghosts:
Replacing an engine, discovering missing parts and tools, with more auto parts littering the floor.  Oh, sure, friendly veteran sang a story about an old war injury prevented him from using manual shift, so that's why there are only 75,000 miles on the speedometer.  You drive classic car home, finding smoke and clanks following you. Not such a good deal, and when online sites send replacement parts, there is always a screw short.
Being in labor for hour after hour definitely makes the list. (45 hours? Followed by C-Section.) After ten hours, just when you beg for an epidural, an army nurse briskly tells you that it is too late to give one.
Flights to the other side of the world.  Australia?  South Africa? Switzerland?  You find yourself in cheap seats, middle seat packed in, next to someone who hasn't taken a bath in the last year. 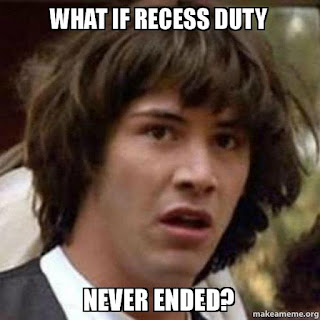 Keanu would do well in recess duty.
Playground duty. You are the only teacher with 300 children racing around an one acre playground.  You clutch a clipboard under one arm and grip the teacher whistle in  a tightly clenched fist.
Waiting for Santa. You are 6 years old and this night is one wished for all year. Tick, Tick, Tick...eyes want to shut but you won't let them...tick, tick, tick...
Picking strawberries day after day after day. No joy after the fifth day. Mid-May arrives with garden full of red berries peeking from green leaves.  First day is like discovering rubies, sweet rubies. Leads onto the second day, third day, fourth day, fifth day....Enough already.  This won't ever end.
Waiting in an emergency room, filled with sneezing and coughing. You have a brain-splitting migraine and your blood pressure is 177/85.  With your head dropping to your knees and a throw-up bowl beneath, you watch as a child with sinusitis(#45) is called in.  You are #62.  You won't live to see the end of this day.
Driving through Death Valley in summer. (Been there, done that) Long straight road over flat desolate land, you see in distance, heat waves fooling you to think it is water.  It is 121 degrees and you watch your car's gas light like a hawk.
Standing in the line at DMV, until legs are shaking, growing light-headed. Husband is home, too sick to go into the line from hell to transfer registration.  You are three months pregnant, and hours pass.  At the third hour, you tell the kind lady behind you that you are pregnant and wonder if...then you open your eyes as you lie on the floor.  Registration was expedited.

Shopping on the day after Christmas and you find there are no bargains worth this amount of physical abuse.
YouTube has numerous of Curling videos
Being forced to watch “curling” during the Winter Olympics. Your family is Nordic, and cheer for some team.  Crushed between Olaf and Sven, you decide to develop a tummy-bug, staying in the bathroom.
Re-modeling a bathroom and/or kitchen the week before company arrives--this is your spouse's idea.  Tearing out the sink and cabinet reveal rot and mold.  Company will be staying in the hotel with you, as your entire house is being examined and treated.
Sitting in rush hour traffic on the Friday of a four-day weekend. A black juiced up muscle car is shaking with the bass turned up high.  You have windows rolled up, and yet you are vibrating as well.
Most or all of this involve unending waiting…and more waiting…including walls of boxes lined up like heavy soldiers.
What about you?  Can you add to this list your own unending events?
This is a repost from April 2014.

Email ThisBlogThis!Share to TwitterShare to FacebookShare to Pinterest
Labels: boxes, flying to end of the world, never ending, rush hour