From the Crest of a Hill

The car parked next to the field, and the man opened the door.  Two dogs leaped out, tails wagging and gratitude expressed in every muscle.  The man motioned toward the green field and those dogs took off. 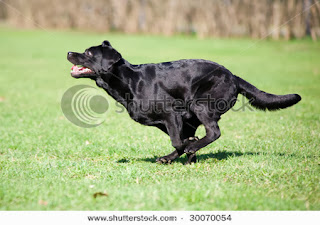 They flew.  The big black retriever ate up the ground with his long strides.  The black and white Border collie glided along the grass behind the bigger dog.  They bounded and rolled with each other, taking turns in the chase, and stopping reluctantly at their owner’s whistle.
The owner held a bright tennis ball, and the dogs lay at his feet in anticipation.  He teased them some, but then lofted the ball far off into the field.
The retriever burst into a full run, hind legs pushing off and front legs leaping forward.  He was fast and soon found the ball.
Behind him ran the collie.  He had run his best and his fastest, but short legs never beat long legs.  Laws of physics demand consistency.
Again, they waited for the owner’s throw.  Again they raced each other to the ball.  Again, the retriever trotted back with the ball in his mouth, head high and tail waving from side to side.  He dropped the dripping ball at the man’s feet and looked up expectantly for the next throw.
This time the collie didn’t return to the owner.  Instead, the wee black and white dog stopped half-way, and waited.
The owner sent the ball off into the field.  The collie watched it go overhead, and ran with it, seeing it land in a patch of sea grass.  He plucked it from its perch, and trotted back.  Coming to a braking stop is hard for a locomotive retriever; he rolled head over tail, just as the perky collie carried the ball to the man.
The collie played the game well, getting to the ball first time after time.  The retriever poured on the power, ran his big dog heart out, but lost.  Finally the retriever gave up, and lay down.
The man whistled and the dogs climbed into the open car door.  They moved slowly, but the retriever moved the slowest of all.
(Observations on a breezy ocean day: 2008)
Posted by Susan Kane at 5:00 AM

Email ThisBlogThis!Share to TwitterShare to FacebookShare to Pinterest
Labels: border collie, catching the ball, racing along the field, retriever