This was my first-ever-in-my-whole-life blog entry.  My daughter walked me through it, and God bless her, I think she was the only one who read it.  Since then, I have made references to Scuba, who was part of the family.  So, with some hesitancy, I have chosen to 'repeat' it.
My son had a cat named 'Scuba', although we didn't know this name for many years, so we called him 'Cat'.  (Note: My son felt that the cat was his, and the name was also his.  He was a teen at the time, as if this would explain anything to anyone else, unless they, too, have gone through those hellish years with their own teenage son.) 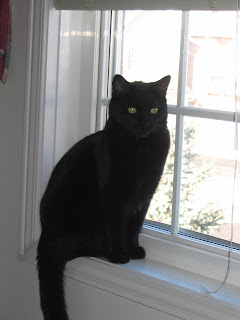 Scuba was a large black long haired tomcat, in his prime at the time of this story.  He could leap from the top of the stairs to the bottom, and take off at a full run.  Scuba would lie in wait under a dining room chair, and wait patiently for a passerby, and then reach out with fully extended claws to attack the ankles.  Then he would tear away at a sprint.  Scuba could be affectionate on his own terms, jumping up onto a lap, and stretching his long body to lay upon the chest, where he would knead the fleshy chest muscles.  His purring mechanism was set on high when he did this.

Being a long hair cat with the teenage boy as his groomer, Scuba developed amazing matted tangles in his soft fur during the winter, when the fur was the longest.  That was when the mother in me would start hassling my son to take care of HIS cat; these words were usually ignored until the matting was obviously painful and interfering with poor Scuba's movement.

As the only driver available, I forced my son and his cat Scuba into the car, and drove to the animal groomer we used every winter when this happened.  This particular day is the source of the title and the blogger name I have chosen, "The Contemplative Cat".

When we entered the grooming chamber, we found the gallery filled to absolute total capacity with large, oh so very large and loud, dogs.  I don't recall the breed, but they were enormous animals, and easily excitable.  The groomer, Carole, explained that these dogs all belonged to one woman, who trusted only this groomer to care for the bounding and barking beasts.  But, she added that her business partner, Bob, would gladly take care of Scuba.

Bob removed Scuba from the travel cage.  Scuba's eyes were set in a predatory and/or defensive mode, and we could tell from his body language that he was not pleased to be there.  But Bob ably put a restraining collar and leash on him, and placed him in a safe shelf, high above the noise below.

Then Scuba did the strangest thing.  Scuba curled up in his familiar position we usually saw when he would sit at the living room window on the back of the couch.  He tucked his paws neatly criss-crossed, and with a proud set of his head, Scuba closed his eyes and began a soft but audible purring.  He stayed in this composed position even as we left.

Looking back on this Scuba event, I identify with this state of peace in the presence of danger and chaos.  Throughout my life when all around me was either a threat or incomprehensible, I have found myself withdrawing from the melee' and going into that quiet contemplative place where my sanity could survive.

I was once told that this "retreat" was the mind's way of surviving a stressful event.  Makes sense to me.
Rudyard Kipling wrote "....If you can keep your head, when those around you are losing theirs..." (not an accurate quote, but generally true to the original meaning).  I see that now as Scuba and my way of getting through awful times.
Thus, I am "the contemplative cat".  Let me know what you think.