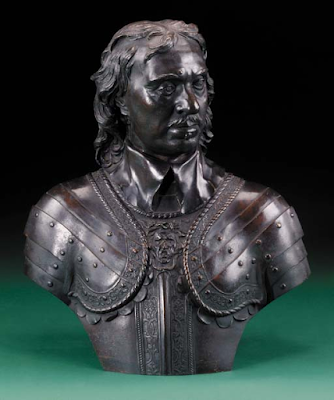 Christies
Depending whether you are of English, Irish, or Scottish heritage, the name “Oliver Cromwell” evokes entirely disparate emotions.***
Cromwell lived between 1599 – 1658, and was an intensely religious man.  Every event in his life, Cromwell believed was ordained and dictated by God.
After Elizabeth I died, succession was a royal mess.  James? No, how about…down to Charles I (who was captured and beheaded).  Much of it was related to two religions, two churches.  Catholic king?  Protestant king?
*** If you wish to avoid all this reading, skip on down to Monty Python's telling about Oliver Cromwell.
Parliament became a total mess as well.
Dissolved, then “Rump Parliament” (honest to goodness, this was its title) was established, consisting of those who supported beheading Charles. It was a very nervous collection of men.
Oliver Cromwell tired of the back and forth of politics, proceeded to walk in with sizable military force under his command. He dissolved the Parliament session for a time.
To keep this Commonwealth from crumbling, Cromwell (with his loyal military) assumed charge of ensuing chaos, suppressing any and all uprising.
England was fairly easy to deal with, so Cromwell moved onto Ireland, where populations were heavily Catholic and were loyal to Charles 1.

To say Cromwell dealt harshly is ridiculous.  His slaughter and subjugation of Ireland 1649-1653 resulted in near-genocide of all Catholics. Cromwell moved onto Scotland to do the same.

In Ireland, if one says “Cromwell”, responses will vary, but all vehement in some way.  It was fairly common for a big huff, a strong mucous spittle on the ground, a swear word of some sort, and perhaps other actions. This is true at this current history.
Oliver Cromwell became Lord Protector of the Commonwealth of England, Scotland, and Ireland. His ironfisted military control kept England together by absolute oppression.
This home has been completely restored.  Each room displayed very realistic figures, props and furniture narrative of his life in Ely.
history, life in that room.  Each room displayed very realistic figures and perfect props.
What was unusual was that it was just after Easter, and the house still had plastic eggs throughout the house. A few on his Bible and rocking chair, even some on his deathbed (not accurate). The special effect in that room was lights dimming, Cromwell shook side to side. What was awesome was that there were some Easter eggs about the room, including one on his crotch.
It was very clear that Cromwell is revered in Ely and all over England where many bronze statues have been erected to pay homage to his accomplishments.
He died in 1658, buried with honor in Westminster Hall, until 1660, when Royalists returned to power.  Cromwell was dug up. He had been interred in Westminster Hall with great honor. A year later he was dug up, without pomp and ceremony. This was supervised General George Monck, a former supporter of Cromwell, who jumped ships.

After Cromwell was disinterred, he was tried posthumously for treason, beheaded, while his body was hung in chains at Tyburn, (where criminals and others guilty of treason were executed).

Without any ceremony, he was tossed into a common grave, minus his head.

The head?  It was placed on a 20 foot spike and displayed at Westminster Hall.
BUT a storm knocked it down, causing the head to roll away.

A soldier found it and decided to hide it in his home chimney. For decades his head passed from hand to hand, often being displayed in carnival shows. (This cannot be made up. Well documented and everything!)
A Dr. Wilkinson bought it and offered it to Sydney Sussex College in 1960.  Cromwell’s head was finally re-buried in a secret place on college grounds.
Cromwell lived a life of religious fervor, where he was certain that he was doing God’s work. He will never be forgotten, in one way or the other.

Religious fervor cannot be tolerated before it erupts in absolute anarchy. He did just that, as have other regimes.

Why would anyone care to learn about Cromwell?  It is an incredible story, almost unbelievable in its horror and violence.  If it were happening today in our own countries, what would we do?  If it were occurring in some other country, what would be done?
This post has been heavily loaded in history and such.  While living in Ireland, we learned much about Cromwell.  Our son in first grade came home one afternoon furious, absolutely furious about what Cromwell and English had done to Ireland, as if it were just yesterday or maybe last week.
***To lighten this post, please listen to this Monty Python performance about...

This was posted back in 2017. Monty Python is brilliant.
We will be taking a train to see our babies in Chicago.  I don't know if I will answer.  BUT please make your comment here!  I won't answer, but I will read!!
Posted by Susan Kane at 5:00 AM