..And then came Samuel: Jason 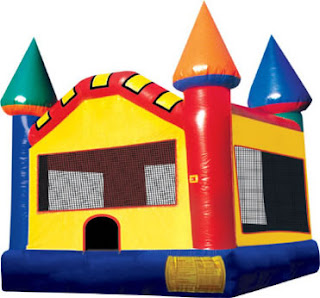 His son Jason was a baby when Zach was chasing birthday parties, Bar Mitzvahs, and street fairs with his bouncing castles.  Jason had gazed with awe and knew that someday, he would be bouncing with the castles and his dad.

Well, that day had come.  Jason had just graduated from high school, and it wasn’t a moment too soon for Zach.

From three castles, Zach had one lonely and very tired, patched together bouncing castle left.

Zach had had to lay off the guys who had planned to expand on the business with ‘Son’.  Now, it was just an ailing Zach, whose back was crumbling with something called stenosis.

Jason, the ‘Son’ part of the formula, was Zach’s hope for a come-back.

“It’s just a birthday party for a bunch of three-year olds, kid.  Easy set-up, bunch of light weight kids.  This old castle can handle one more party…” Zach had promised as Jason loaded up to head over to the party.

Zach lay in the recliner with a back brace strapping the back bones together.  “And, then we can look at the new models…take a loan out…buy bigger…”

By then, Jason was already slamming the front door.  ‘One more party? I sure hope it is just one more…don’t think I can take anymore…’

Then came Samuel.
Posted by Susan Kane at 5:00 AM

Email ThisBlogThis!Share to TwitterShare to FacebookShare to Pinterest
Labels: a future and a hope, bouncing castles at parties, charm of children, Father and son businesses, Jason, Samuel's third birthday