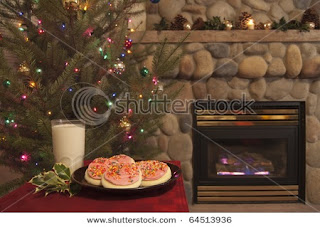 The Mommy gave a green crayon and some paper to Samuel after strapping him into the high chair.  “Write a letter to Santa!  We’ll put it with the cookies and milk tonight!”  Samuel gazed at the paper dismally before grasping the crayon in little boy stickiness.

He formed his thoughts and began to write. Dear Fat Man in the Red Suit,  I concede to your knowledge and wish to inform you that I do not regret a single thing.  Well, the cat and scissors episode was a mistake on my part….

Samuel beheld the paper which was now partially covered in scribbles, not in the clear words from his head.   Dammit, green stick!  Obey, or feel my wrath!  But to his dismay, his hand continued to make the same scrawl. Oh, well.

He continued, …but The Cat is doing well, and we have made our peace.  Please accept this humble milk and cookies as an offering of friendship.  Sincerely, Samuel

The word “sincerely” stuck in his throat, but a little lying was fine at Christmas, as he had observed adults greeting each other with feigned delight.  Then Samuel smashed the green crayon into pieces on his tray.  You were warned.

That Christmas Eve night, The Mommy let Samuel carry the plate of cookies to the coffee table.  Both parents beamed with pride at his carefulness.  The Daddy put the glass of milk down beside the cookies, while The Mommy gave Samuel the letter to place with the cookies.

While The Parents laughed and hugged, Samuel turned his back to them, and prepared to place the letter atop the cookies.  Before this was done, Samuel dug deep into his nose, and removed a booger.  I have been saving this all day, just for you, Santa!

He smeared the booger onto a raisin on a cookie at the edge closest to the fireplace.  Eat this, Fat Man!

p.s.
During the Christmas season, I will be re-posting "The Chronicles of Samuel".  Responding to comments will be difficult; we are expecting 21 family members throughout the next week.   Pray for us all.  God bless you, each and every one, with the joy of God's gift to us, Jesus Christ.

Email ThisBlogThis!Share to TwitterShare to FacebookShare to Pinterest
Labels: cookies and milk, letter to Santa, Samuel and Christmas Eve