Memories of Dick and Jane

A question in Reminisce, October/November 2011, was:  “How many remember Dick and Jane books from first grade?”
This question was posed by a reader and received a huge response.  Most responses were phrased along the same lines.

“I still remember sitting in a circle reading Dick and Jane in first grade with Mrs. Everette, 1956-’57.”
“Yes.  I remember they did a lot of running!”
“This brings back the thrill of learning to read in my first-grade class in 1962…” 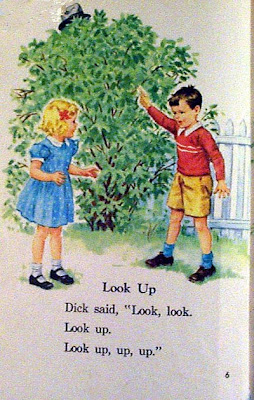 Dick, Jane, Spot, Puff, and Tim…they were like neighborhood friends who dressed nicely and did the same running as we did.  Reading involved phonics and lots of repetition.
It was an exciting, distinctive era.  It begs another question:  How would that series be translated into the current era?

For that matter, what readers (primers) came first?
It boggles my mind, as it runs rampant through all the possibilities.  The neighborhoods are now so altered; children playing outside are at risk.
The mother is definitely not wearing pearls and a shirt-waist dress with a crisp apron.

The father is probably working on the computer at all hours; heck, he may even work from home.  That is, if there is a father in the home.
The grandparents may be the ‘primary caregivers’ for a number of reasons.
Would today’s children be running with their dog and playing a game outside?  Or, perhaps the children would be plugged into an MP3, playing a video game, or watching “My Babysitter is a Vampire”.
It is a world poles apart from that of Dick and Jane.  Children learn to read from different readers, which are probably politically correct and use a contemporary approach to reading.
What will today’s children remember fondly from their first learning-to-read books?  We will have to wait and see.
Posted by Susan Kane at 5:00 AM