Today is Thursday, July 12, and this is the first day for readers to seize the opportunity provided by Carole Anne Carr:  The release of her new book First Wolf was yesterday, and she is offering a free e-book to those who wish to get one.
Carole has written a summary of the book:
First Wolf
Book One - Wolf Series
– a children’s quest adventure story is set in 8th century Northumbria that is being promoted as a free eBook on the 12th and 13th July – Pacific Standard Time.

It was Toland’s twelfth year of life when his father hurled the wolf’s head at the mighty Eorl Uhtred, bringing his childhood to a violent end.  These were dangerous times, with people driven from their settlements, tribal wars, and bands of robbers on the roads, but Toland must keep his solemn promise to save the Lindisfarne Gospels from the Vikings, protect his family, and find his father.  With his faithful hound Bodo, he sets off on his quest through Anglo-Saxon Northumbria. Surviving the first Viking attack of Lindisfarne, his many adventures lead him to the mysterious hermit on Inner Farne, Bamburgh fortress, the slave girl Kendra, the mystery of the stolen jewels, a blood debt, and a terrible discovery at the White Church…..
Link for purchase: http://www.amazon.co.uk/First-Wolf-ebook/dp/B004P8JT7S
http://www.amazon.com/First-Wolf-ebook/dp/B004P8JT7S
I hope you take advantage of this offer!  I am currently reading Candle Dark, and am ready to leap into this new book.
AND  the Queen visited Shropshire on July 12 (English time zone) in celebration of the Jubilee.  As a member of  W.I.R.E. (Women in Rural Business), Carole was able to set up an area with her books on display.  This was an exciting day for Shropshire! 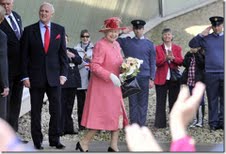 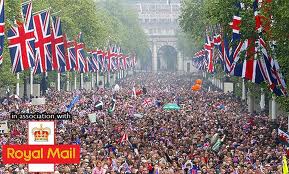