Crawling is the first power 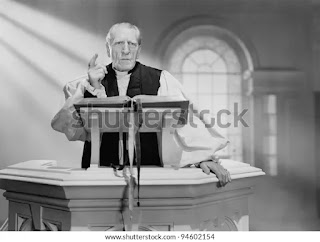 “There’s a storm comin’!  I tell you a storm!” Pastor Grimley yelled, pounding the pulpit.  “ARE YOU READY?”

The congregation shouted Amen, Praise the Lord…waking Emily from her nap on the pew.  Mama was standing, being one of the Amen group.
Emily rolled and then planted her chubby little feet on the maple floor.  The walking thing was still iffy, but she had the crawl-ing down.  Distance to the pulpit wasn’t far at all, and at a fast crawl, Emily could cover it before Mama noticed.
And, off she took, under pews, between legs, around feet, past purses.  Oh, Emily knew she was fearless, and this would be another time she found freedom, with her white diaper bottom wagging behind.
“Can you make a joyous noise to the Lord??” Pastor roared. Cue the organist, who joined in with a chorus from different hymns.
Emily reached the pulpit and pulled herself up, pounding on the cross.
“Root out sin!  Let joy rise as a fragrance to the Lord!” He raised his arms, pointing to heaven.
Emily plopped down on her bottom, onto a loaded and ripe diaper.  You betcha!  Emily clapped and cooed as Mama came running.

Thank you, Elephant's Child for provided the bold underlined italicized words!  She tosses 6 to 12 words out at writers to take up a challenge in their writing each week.
Go to her site and check comments, take up the challenge.
This is a 2014 posting.  I am culling through previous posts. Some of them are good, some are mediocre, and the others will never see the light of day.
Side note:  Have you ever enjoyed such a church service? We never had any pulpit vandalism, but had the "amen and praise God" congregants.
Posted by Susan Kane at 5:00 AM