Through the Gates of Peace


When the sun rose that day, the body of a badly beaten man lay sprawled on the banks of the Mississippi near the small town of Rinfield**, Missouri.  Although the only thing of value that remained was his suit and any thing known was that his face had been battered beyond recognition. Every Rinfield resident knew this man and liked him.

Since the site was by the barge landing, most assumed that some rough men crept in and took Levi, expecting a great fortune. That was enough effort given for finding the guilty.

Levi Rosenfeld (this name was chosen randomly and does not relate to anyone, living or dead in this post)  was an upstanding member of the community, dedicated to helping others, and supporting and caring for any who needed help.  “A good man, God Bless ‘em!”

Levi Rosenfeld was a Jewish man in a small Christian town, and presumed to be wealthy, since he was a jeweler who traveled the Mississippi to St. Louis to trade.  His wife, Grace, was the opposite of her Levi; she was vicious and flaunted her own wealth.  When people spoke her name, they crossed themselves.

The rest of the Jewish community continued quietly to work, pay bills, worship in a distant synagogue some sixty miles away.  That they were Jewish was known by all and accepted.  “Stay in their own place, I’ll give ‘em that."

Levi Rosenfeld was buried in a Jewish Cemetery some distance from town, in a partially hidden copse of oak trees.

It was a quiet closing for a good man.

Is this a true story?  Yes. 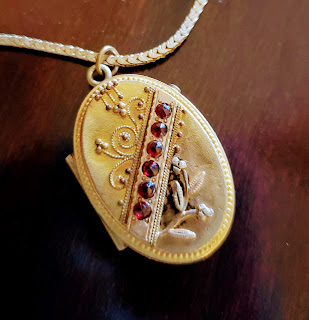 Great-aunt Ruth's locket, given to her by her father,
the jeweler.

We have driven by that cemetery for decades, until it became just part of the scenery. It was only as a kinda senior citizen adult that I decided to learn more about it. My mother told me what she had learned from my grandmother.

Truth is that Ruth's mother, Grace, was a mean spirited woman.
**Imaginary town
Posted by Susan Kane at 5:00 AM