Why didn't they kill that mouse? 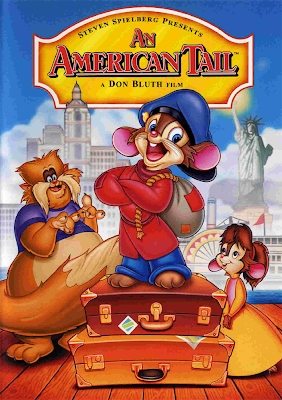 1987: We were hurrying through an Irish downpour rain.  Three children in the car crying, “The movie starts in five minutes…”  Tears and desperation flowed.  Down my face.
A parking place, had to find a parking place.  Dammit.  There’s one, but it’s a tight one, and I’ll have to parallel park with traffic behind me.  “Quiet, kids, let me get parked.”  Lord, help me!  I hate parallel parking…
Zip, Zang, and I was in the spot.  Perfect.  The kids leapt out the passenger side onto the concrete.  Me?  I had to crawl out into traffic, where a river rampaged down the gutter, and cars sprayed me.
On a pelting run, we made it to the ticket window, and paid the snotty teenager who said, “Movie’s already started, ya’ know…”  Pushing the kids ahead of me, I whispered all sorts of mild profanity in response to the teenager.
We found our friends and settled into watching “The American Tail”.  A poor Eastern European family of mice were emigrating to America.  They got separated, with poor #@^& boy, Fievel, trying to find his way back to the family.  Fievel was befriended by unlikely carnivores, chased by likely carnivores. 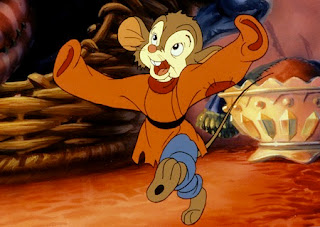 The key song, “Somewhere Out There” is sung as a duet, with Fivel in one part of the city and his saccharine sweet sister in the other.  My mood softened a little, but not enough. 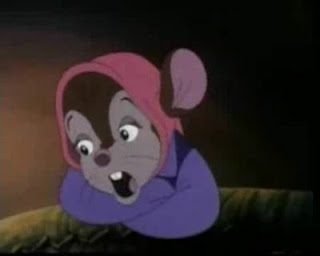 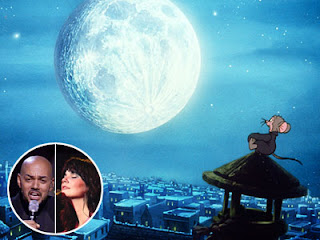 I watched the movie with a jaundiced eye.  A cynical heart.  Still cold and wet from my traffic shower bath, I saw that mouse, @*#% Fievel, escape certain death time and time again.
Inevitable reunion ended the movie with music swelling and my kids laughing happily.  All I could think was, “Why didn’t they kill that #@$ mouse?”
Fast forward to 2012:  I still think that Fievel should have bit the dust in the first 30 minutes.  The sister would have made a much better lead.  Fievel didn't have a brain in his mouse head, or an ounce of common sense in his furry mouse body.
Posted by Susan Kane at 5:00 AM

Email ThisBlogThis!Share to TwitterShare to FacebookShare to Pinterest
Labels: An American Tail, cynicism, Fievel, rain and traffic, Somewhere out there, taking children to movies