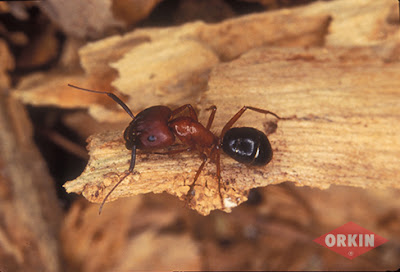 Ant Colony Story, first published in January, now re-posted since I am off seeing my two-year old grandson. Haven't seen him for a year and a half.
Recent floods, smoke and fire and the installation of artificial turf had forced Ant Colony 307B to relocate at a far corner of an artichoke field. The ant army acted as a unit to move every member from the arterial twists and turns of the now drenched network of their former home.

Moving the queen ant with her arsenal of ant larvae and drones had proved to be most interesting. Trudging through soggy tunnels had revealed an unknown treasure of collected artwork. Minute paint chips, grains of paprika, and tiny shreds of colored paper lined walls of the queen’s chamber.

The real treasure remained were left behind as the tunnels collapsed. Just how extensive is an ant colony/hill? And, where did the Queen make it out safely?
My son is an entomologist and confirmed that
red ants are vicious.
Watch this video. This is a repost from 2014. Red ants have started to emerge, with high temperatures and dry air. Source:All the ants will die in this video. Good thing, too.
Posted by Susan Kane at 2:57 PM