The Power of Love

Another daughter, Mary (who will be visiting from Switzerland in 10 days, bringing husband and grandsons) was only four years old when we moved to Ireland.  She was a sprite and not at all shy even then. 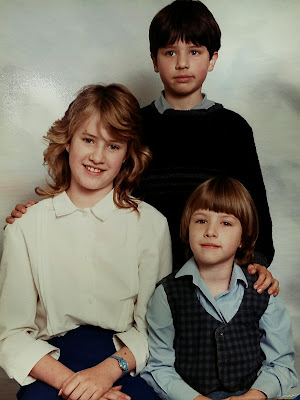 When the school year started, Mary was 4.5 years old and ready to enroll in Junior Infants/pre kindergarten at New Inn School, Glanmire, Co. Cork. One of the greatest ideas of all time is school uniforms.  Pants, skirt, and vest were polyester which meant they could be washed each night, worn the next day, and then repeated.  Wore like iron, they were awesome.

We went shopping at Dunnes Store where everyone shopped thirty years ago and scouted for grey with blue shirts.  Mary ran off sprite-like and soon was found.

One thing about Mary was/is that she has a piercing and loud voice.  Anywhere she went, we could find her easily.  On this day, Mary was standing by the tri-mirror next to the changing rooms and was singing with all the gusto and joy that a four year old has.

She had ripped into a Celine Dion song "I am your lady" with chorus lyrics, as interpreted by a four-year old:

'Cause I am your lady/You are my man/ Whenever your reach for me/I'll do all that I can.

I do not believe that most Irish people had ever heard their children singing that song or singing with such passion. Dunnes was silent as Mary moved to the last lines (again as translated by a four-year old:  frightened became fighting:


We drove home with school uniforms and with Mary still singing.  I just smiled. The power of love.

Note: Older daughter had a cassette tape of top music from mid-1980s. Mary sang along with her sister.  In the car, Mary started singing "Like a Virgin" by Madonna. Sigh.