Changing of the Seasons

On a bright October afternoon, my brother Don took us on a drive along country roads that Mom had traveled many times over her 82 years.  The sky was glorious, one of those brilliant skies that changes tones of blue throughout the day.  The leaves had begun the magic that seeped from green to red and gold.

Everything held the sense of being so temporary.  The leaves and all their beauty would be a sodden mound of brown mulch in a few weeks.

The sky would be filled with winter clouds.  And my mother—what would she be in weeks’ or months’ time?  That was an unsaid question that floated over us along this drive along country roads and past harvested fields.

“I used to wade in the stream right there!” Mom exclaimed as we pulled off the road and down to the gravel stream bed.  Don and I ambled over to the water, talking in low tones about Mom, while she stayed in the car.  Don picked up a stone and skimmed it along a shadowy deep drop in the stream.

“No, not there!  Further down…” Mom called out.  As fragile as she was and no matter how much each breath cost her, Mom would tell us the right way to go. 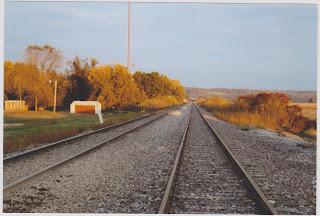 Later, we drove by a faded ancient house, one that leaned whichever way the wind was blowing.  The whole house gave the illusion that it was held up by the fact that the window frames were still square, and the front door was shut.  Other than that, the poor place was a lost cause.

“Oh, you used to play there, Susie,” Mom sighed.  Her hand pointed out the window.  “Over there Anna had a picnic table and we used to watch you kids while we…”

I looked at the hand with its transparent paper-thin skin, bulging blue veins, and bones.  So gnarled and painful now, those hands had held mine all my life.


After driving along back roads I never knew existed and hearing about the people who once farmed that field, people who lived in a house now a heap of rubble, we took Mom back to her home. 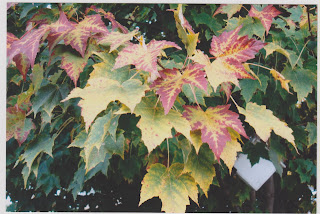 While she napped in her recliner, I looked out her kitchen window, seeing some rain clouds moving in from the west.  The color of the air itself had transformed to gray.  I took a photo of a tree outside the kitchen window.

“I wonder how many more times I will look out this window?”

The clouds moved in, the rain was almost weeping, and my mother slept for the rest of the afternoon.  I stood at the window, watching the leaves fall, and listening to the sound of the clock ticking on the piano.


P.S.  This was posted a year or so ago.  my daughter is having surgery and I will be busy. Ithought this deserved a re-visit.  Susan Kane
Posted by Susan Kane at 5:00 AM