Pain is both a curse, and a reminder just how fragile and complicated our bodies are. So much could be said about pain, but since we are all humans here not much needs to be stated.

Migraines are my bane, since they have been with me from age four. Cures and treatments have been many, but science is incredible. Botox, CBD, recognizing when to fight (Ha!) or when to flee. We are so lucky.

Treatment options were creative and horrific in centuries ago. Here we go:

Wear a goat headband which is made by the skin of a virgin goat. After processing it, cut and make a headband. It would be tightened until pain is just as bad inside as the outside. Important: Virgin goat?


Bind a clay crocodile holding grain
in it mouth on the head of the patient
using a strip of linen. It bore the
names of gods Egyptians believed
could cure their ailments. This is from a papyrus 1550 BC. unique treatment for headaches

Run a warm, sweet bath. One of the few cures from ancient times that actually has some efficacy.

Add some electric eels to the bath. Ruins a good bath. water and electricity

Trepanation  Drill a hole in the skull, releasing the pressure on the brain. This has been around since caveman times. Skulls from ancient times have confirmed this. Stayed in fashion until the 1600s  where it was believed to release demons.

Drug soaked poultices developed by a nun in 1100 AD. Place a linen soaked in opium and vinegar solution on the head of the sufferer. It make have had some effect. The vinegar opens the pores of the head, allowing opium to be absorbed.  history of headache treatments

Tie a mole on the head. Ancient practitioner said this after his treatments failed. "We might as well tie a mole over the pain." This was, of course, said in frustration. But, hey, try anything at that point. 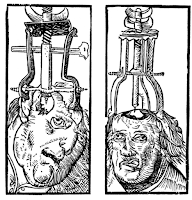 Burn the head and skull A lot of latitude here, since the physician holds the scalpel and glowing red bar of metal. Shaves head first and then cauterizes area , down to the bone. More actions are to happen, but are too distressing to write here. Bizarre treatments

If pain still persists, there are other treatments.

May God help you if you pursue questionable treatments. 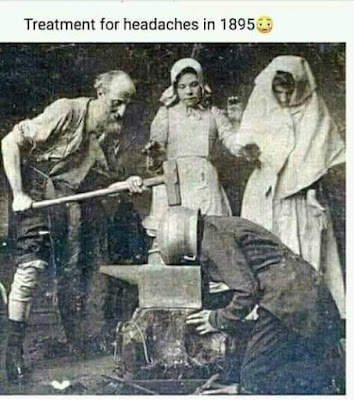 Side note here. When someone is in severe pain, that person will desperately try different cures. Trust me. I know.

Email ThisBlogThis!Share to TwitterShare to FacebookShare to Pinterest
Labels: burns on the head and skull, cauterize, clay crocodile, cure of pain, drilling holes into the skull, eels, goat headband, migraines