A Town Lost in Time

One afternoon seemed much like the other as markets opened their shops, as wives and mothers swept out the dust and mud that had built up from the day before. A normal day for Aemilia and her two sons, she waited for the next shaking of the earth.

Aemilia's husband had shrugged off her worries. Calvus held no concerns at all for the shaking. Vulcan and Hephaestus were at work in the holy mountain, Calvus reassured her.  Just make an offering to Vulcan, pour dark red wine on the rocks by the temples, and all will be just fine.

The ground shook all through the day and into the night. There, Calvus stated, see the smoke rising from his forge.

The sky exploded and smoke became a billowing monster of gray and black. Before Aemilia could gather her sons to her side and Calvus could run back home, fire and ash rained down on them. She had no time to even cry out as she clutched the boys to shield them with her body.

In brief moments the ash settled on them, cloaking them in gray death. Her home in Pompeii was now lost in time. 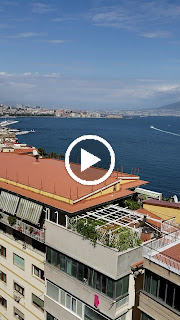 video we took  from across the Bay of Naples
I hope this video plays, but if not, oh well.

We were looking down on the bay of Naples. Having just come from Pompeii where some of the town had been excavated, we could only start to imagine what true horror had happened.

Email ThisBlogThis!Share to TwitterShare to FacebookShare to Pinterest
Labels: 79 AD, doom in seconds, earthquake, eruption, moments, no time to run, Pompeii, Vesuvius, what can be seen